On November 13, the Postal Regulatory Commission (PRC) approved the Postal Service™’s proposed prices for both Market Dominant and Competitive products as filed. Also approved were the promotions the USPS® proposed as part of its Market Dominant filing. Both sets of rates will be implemented as planned on January 27, 2019.

In its order, the Commission concluded that “the planned price adjustments do not violate the price cap under 39 USC 3622(d) and are consistent with, or justified by an exception to, the workshare discount limitations appearing in 39 USC 3622(e).”

Included in the Competitive products filing, the Postal Service proposed structural changes that included zoned rates for First-Class™ Package Service and dimensional pricing for light-weight parcels over one cubic foot that are entered at Priority Mail® Express, Priority Mail, Parcel Select, or USPS Retail Ground rates. Several mailers and industry associations claimed that the scope of programming changes required to shippers’ systems to implement those structural changes were too extensive and asked that the USPS defer their implementation. The USPS Board of Governors responded by granting a five-month delay to June 23, 2019. The PRC has not approved this change, but it is expected to be approved. All other elements of the Postal Service’s competitive price filing will be implemented as planned on January 27.

Below is the schedule for 2019 promotions: 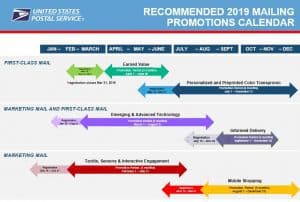